What You Need To Know About Color Pigments?

What You Need To Know About Color Pigments? 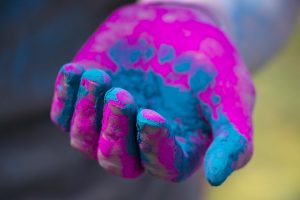 “God may work in light, but we mortals work in pigment”

Well said Robert! How gracefully you’ve portrayed the significance of pigments in artistic world, in the delightful world of colors and paintings.

Dear readers, you might have heard about the types of color pigments and solvents, but what else you know about color pigments in detail? Do you know for what pigment red 254 is used for? Why do we use pigment orange 13? Moreover, how light is reflected into pigments, and we perceive them in their actual bright shade?

In this blog, we are going to discuss all what you need to learn about color pigments, their amazing facts, and informative details. Are you ready to take a journey to pigment world? Let’s go;

All about Color Pigments

Pigments are the color chemicals, which absorb selective wavelengths; they stop certain wavelengths of light from being transmitted or reflected. Since paint contains pigments, so when the white light (which usually consist of blue, red, and green light) shines on colored paint, it only allow few light wavelengths to be reflected.

Pigments, which are chosen for watercolor painting, are the same in all mediums. In broad terms, pigments are classified as:

The pigment in colors is seen because it reflects the light that shines on it. But, it doesn’t mean it reflect all colors extensively, It will reflect only that color which is mutual in both light and pigment.

Always bear in mind that pigment will appear only in those colors, which are common to both light and pigment. A tint of shaded light will change, yet it won’t beat the color shading since the tint is made out of some of each of the three added substance primaries.

Similarly, pink light is a tint of red light since it has somewhat blue and somewhat green in it. The green outfit under pink light will still be green, but will be a slightly darker shade than natural because some of the blue and yellow pigment will turn black.

The Pigment red 254 is among those colored paints, which rarely gets much attention. This colored pigment depends on a natural compound called DPP, first known to have been integrated in 1974 by Michigan State University science teacher Donald G. Farnum.

The pigment orange 13 is also one of that kind of alternative pigment which were used for some specific reason in past era, and now have been replaced with some other organic pigment material.